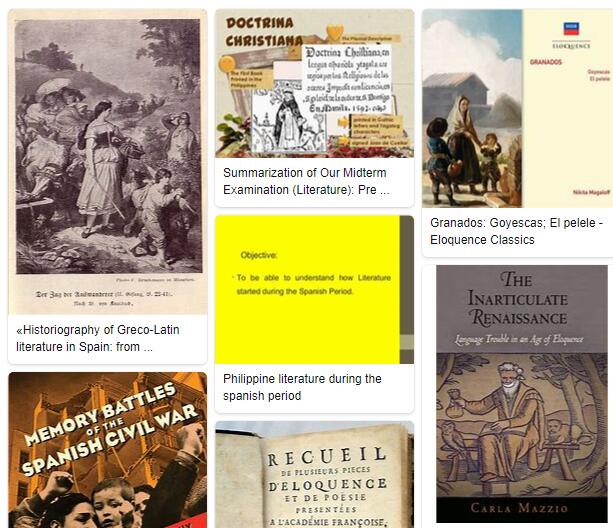 The sacred eloquence of the Spanish seventeenth century is copious, reasoning, solidly firm in the dogma and seriousness of its own doctrine. He does not disdain worldly and literary allurements, even in Pedro de Valderrama’s Sermones ; but it becomes capricious and baroque, abundant with figurations and allegories, in the sermons from the pulpit, and intellectually tends towards the conceptual, the dissuaded and the bizarre. Examples are the Oraciones evangélicas or discursos panegíricosby Hortensio Félix Paravicino, who was called the preacher of kings and the king of preachers. In asceticism and mysticism, which have lost their creative spirits, it is erudition that triumphs, fragmentary and generalizing, without a solid cement of original experience. Juan Eusebio Nieremberg in the Tratado de la Hermosura de Dios (1641) summarizes the doctrines of Plato and the Neoplatonists, of St. Augustine and of the scholastics on the problem of beauty, thus giving a summary of what was for two centuries the vital nourishment and spirituality of aesthetic thought and Spanish religious sentiment. The Guía espiritual, on the other hand, had a worldwide impact(1675) by Miguel de Molinos; who, with a clear prose and with a fitting expression, develops the theory of quietism and the immersion of the soul in nothingness in the most lucid order. Historiography was abundant in particular stories, among which few emerge for intrinsic value, such as Antonio de Solís y Rivadeneira’s La Conquista de México (1684). Each religious order had its own historian: Orden de San Jerónimo (1600) by José de Sigüenza; Orden de la Merced (1639) by Gabriel Téllez. Each saint had his biographer and each city its own scholar. The Anales eclesiásticos y seculares de Sevilla should be mentioned for the breadth of documentation and patient coordination and analysis.(1677) by Diego Ortiz de Zúñiga. But everywhere one observes that excessive attention to the minimal fact which yields, through apologetic tendencies, to the suggestions of the apocryphal and loses sight of the synthetic notation. With wealth and precision of minute, orderly and methodical erudition, Nicolás Antonio (1617-84) compiled the Bibliotheca Hispana Vetus and the Bibliotheca Hispana Nova, a bibliographic index of Spanish writers, one from Augustus to 1500, and the other from 1500 to 1670.

The great inventive spirits and the great poets have disappeared, the traditional fantastic modules have been exhausted, the content of drama and comedy has been stylized and schematized, the lyric has been detached from the popular vein that has continually drawn from Lope to Góngora, from Quevedo to Manuel de Villegas, literature declined into passive imitation, then into prose echoes and impersonal elaborations. It was a bit of a cult of the past, the feeling of a glorious tradition whose greatness was nostalgically colored by the political and military decadence of Spain. The erudite historiography of the seventeenth century continues in the eighteenth century, but with greater critical caution, with documentary needs and with new means of investigation. It is aimed at clarifying and arranging the past, unconsciously preparing the future.Bibliotheca Universal de la Polygraphía española by Cristóbal Rodríguez. Enrique Flórez begins (1749) the monumental España Sagrada. The brothers Rafael and Pedro Rodríguez Mohedano, following the example of the Histoire littéraire de France, compile the Historia literaria de España. Meanwhile, the Antigüedades de España (1719-21) of Berganza appear; while Gregorio Mayans y Siscar, editor of Juan de Valdés and Luis Vives and first biographer of Cervantes, updates and improves the bibliography of Nicolás Antonio. Martin Sarmiento ordered the Memorias para la historia de la poesía española (1775); and Casiri illustrates the Bibliotheca arabico – hispana Escurialensis(1760-70), which will later be the source of Juan Andrés’ Arabism. With the accession to the throne of Philip V, of the House of Bourbon, the royal authority moves towards an enlightened despotism that bends, also due to political events, towards the ideology of France. This reflects the establishment of the Biblioteca Nacional (1712), the Academia Española (1713) and the Academia de la Historia (1735). Ardor for novelty and a greater openness of critical spirit are manifested in the Diario de los literatos de España (1737-42) and in the Poética(1737) by Ignazio Luzán, founded on the precepts of Muratori, Gravina and Boileau. It is a work that has a historical value of reaction to the dominant taste, with a reference to the simple and the natural against the bombastic and artificial. Luzán identifies the aim of poetry with that of moral philosophy, he wants a didactic art that attends to the useful and the delightful, demands the imitation of nature both in the universal and in the particular (art idea and art copy), and is partisan of the dramatic units following the example of the poets of other nations. The Teatro crítico universal (1726-39) and the Cartas eruditas spreadby Jerónimo Feijóo y Montenegro. The encyclopedism of this Benedictine is of an unscrupulous latitude. With his simple and nervous, clear and gallicizing style, he fights prejudices, superstitions and forbidden customs. In science, he shows himself inclined towards the experimental method; in hagiographic criticism, following the example of the Bollandists, it requires an examination of historical sources; in aesthetics, he looks for the I do not know what of feeling; in politics, he detests closed nationalism and, without denying the fatherland, accepts what is universally human in every nation. With the affected exaggerations and the sarcastic ironies a la Quevedo, in his Vidaof intellectual pícaro (1743), Diego de Torres y Villaroel expresses that eagerness for renewal that pervaded Spanish culture, which remained in science to investigate essences or substantial forms. Sacred oratory, which has expired to stereotypical forms of conceptualism, the scholastic methods of the time become empty and formalistic, find their caricatural mockery, sometimes taken to grotesque realism, in the Fray Gerundio (1758) by José Francisco de Isla, a very happy translator of Gil Blas de Santillanaof Lesage. The critical movement of this first half of the eighteenth century is more negative than constructive, more informed by rationalistic principles than by aesthetic principles, generic and at the mercy of personal preferences; therefore unable to evaluate the national tradition if not in fragments. The criticism that hinges above all on Calderonian theater is a poor thing; both in the satire of Gerardo de Hervás and in the paradoxical preface by Nasarre to the Comedias del Cervantes, both in the Desengaños of the teatro español by Nicolás Fernández de Moratín, and in the writings of the Clavijo y Faxardo. The work of Louis José Velázquez de Velasco, Origen de la Poesía castellana(Málaga 1754), which was written by the first German romantics, is a formless compilation without directive criteria.

The literary renewal, which took place in the second half of the century, rests on a resumption of contact with the best Spanish lyric tradition of the Renaissance and the golden age. Thus there is an aristocratic and formal flourishing of Horatian spirits and popular musical lyricism. It begins with Nicolás Fernández de Moratín, whose odas pindáricas and canciones, some a liras and others in the verse of Francisco de la Torre, present movements and attitudes of classical taste, in contrast, in his songbook, with the popular intonation of the quintillas of the Fiesta de toros en Madrid and romances. This eclecticism, which is also common to Cadalso’s lyricism, and which rests on the tradition of melic poetry continued from the seventeenth century to the margins of pure literature, also characterizes the Augustinian Arcadia of Salamanca. It claimed to renew Luis de León’s lyric, but echoed it formally, without assimilating its spirit. Rather, he moved towards idyllic-elegiac forms, with sentimental perplexities of weary and affected grace. Diego González, Juan Fernández de Rojas, José Iglesias de la Casa, gathering selected flowers in the beds of the lyric of the century. XVI, were the proponents of a tender and soft poetry, which is an escape from reality in the world of imaginative and musical isolation. The art of Juan Meléndez Valdés (1754-1817) flourishes in this environment, in which echoes of Saint-Lambert, of Gessner, by Thompson and Young. In the conventional static of subtle psychological developments, he managed to make the life of the aristocratic eighteenth century feel felt with its melancholy confidences to the woods, streams and the plaintive echoes of a stylized nature. The humanitarian philosophism of the century (To fanaticism ; La despedida del anciano), abstract religiosity (Al ser incomprehensible de Dios) and neo-humanistic aestheticism (Las glorias de las artes), however, penetrate into his later lyric. These are precisely the spirits of renewal that permeate the poetic production of Gaspar Melchor de Jovellanos. A statesman, the soul of a reformer, in love with beauty in all its manifestations, the Jovellanos brings the lyric back to historical and human reality, in moral epistles of pure Horatian style addressed to his friends in Salamanca and Seville. There is in him an aesthetic feeling that is still somewhat linked to the pedagogical goal, but which, immersed in the wider national consciousness, manages to touch the eloquence of patriotism. If in Meléndez Valdés, probably under the influence of Winckelmann’s theories, we witness an exaltation of aesthetic activity as an expression of life and of human nature in its profound essence, we observe in the Jovellanos a lively accentuation of the love for history, especially medieval, as an expression of the formation process of the homeland in its past. These two reasons that can be grasped in both writers already hint at the transition from rationalism to the not-so-distant romanticism. The sad melancholy and the veiled anacreontic epicureanism are at the basis not only of the small songbook of José Cadalso, who was also a smiling critic of the contemporary world (Los eruditos a la violeta ; Cartas marruecas), but also of the greatest songbook by Nicasio Auvarez de Cienfuegos. In other words, pre-Romantic literary motifs emerge, due to English, sepulchral and nocturnal poetry. They attest to the growing need for an intimate and profound lyricism in its pure subjectivity.

Shopping and Eating in Portugal