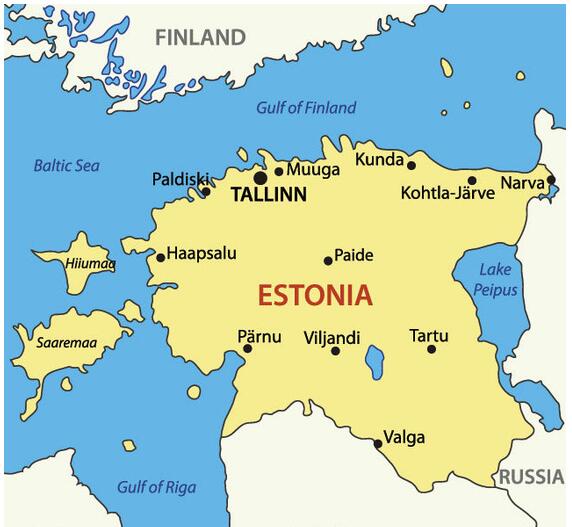 Estonia is committed to protecting its nature: a quarter of the country is protected. The visitor can explore the flora and fauna in five national parks as well as numerous nature and biosphere reserves. And it’s worth it.

About half of Estonia is forested. With a bit of luck, you can spot lynx, deer, wild boar, elk or wolves in the country’s deep forests. In the primeval forests of Alutaguse there are even around 100 bears.

The Baltic country has around 90 native tree species. Pine, spruce, alder, aspen and birch – the latter are a symbol of Estonia – are the most dominant. In summer, delicious berries grow in the herb layer, which locals collect and sell at the markets or at small street stalls.

The moors, which make up around 20 percent of the country’s area, are an important habitat for numerous animal and plant species. A hike through one of the wetlands is not to be missed. In Soomaa National Park, for example, you can follow a circular route. On plank planks, a multi-lingual signposted nature trail leads visitors through the landscape with dry feet, a lookout tower allows a beautiful panoramic view. The color contrast of deep black lakes, colored heather plants, deep green grasses, red cranberries and brightly shimmering dragonflies is breathtaking. The complete silence complements the experience. You can even spot carnivorous plants in the Estonian moors: the round-leaved sundew grows here.

The country has a very long coastline that offers a habitat for very special animal and plant species. Baltic sandpipers, snipe and the rare natterjack toad live here. During a boat tour in the island world, the visitor can encounter gray and ringed seals. In addition, the sea shapes a landscape in which rare orchids thrive.

Ornithologists are particularly drawn to Estonia, more than 370 species of birds can be observed here. In spring the migratory birds – coming from the south – rest in the west of the country, in August they take the opposite route. The Matsalu National Park on the west coast is a Mecca for ornithologists, it is home to numerous breeding and migratory birds. Barnacle geese, for example, stop here, and in autumn cranes rest in the national park. The best time for bird watching is in mid-May, when bird migration reaches its peak.

In the forests or moors, nature-loving visitors can observe owls, capercaillie, but also golden and osprey, as well as white and black storks. By the way: the barn swallow is the national bird of Estonia.

As a member state of European Union defined by Countryaah, Estonia is extremely sparsely populated, nature plays a major role. The best conditions for those interested in nature, ornithologists, hikers, cyclists or those looking for relaxation to enjoy the vastness of nature. For more information on Estonia’s national parks, see Destinations.

Foreign rule has clearly shaped the Estonian culture. Architecture, art and customs did not remain unaffected. Defiant monastic castles, Orthodox churches with onion domes, neat spa architecture, a cuisine influenced by different nations and, last but not least, the gigantic Singers’ Festival in Tallinn – all of this is an expression of the eventful history.

The song festivals (in Estonian: Laulupidu) are an integral part of Estonian culture. Every five years since 1928 the Tallinn Singers’ Festival has been transformed into a stage for a music festival based on ancient traditions. Thousands of people maintain the tradition and thus express their national consciousness. At the last song festival in 2009, many thousands of artists were involved. The tradition has its origin in the first song festival in Tartu in 1869, when the Estonians sang for their independence for the first time. The next song festival will take place in 2019 – definitely worth the trip!

Another expression of Estonian culture is handicrafts. The goods made of wool, textiles, clay or wood, which are often offered as souvenirs, reflect Estonian traditions. The inhabitants of the island of Muhu, for example, are known for weaving traditional costumes, which are still worn today for special events. Or the so-called bear trousers: These are colorful woolen overpants for children so that they can defy the cold winters. The traditional knitwear, their patterns and colors are also finding their way into current ethnic fashion.

As progressive as Estonia is politically and socially, the small country is also culturally. It not only adheres to old customs, but also cultivates a “modern culture”. Festivals for modern music, art galleries, theaters and the like are present all over the country. Those who are enthusiastic about nude painting can visit the gallery of the artist Evald Okas in Haapsalu. In Pärnu, the Chaplin Art Center in the former headquarters of the Communist Party shows modern exhibits by artists who have a penchant for provocation. The Kondas Center in Viljandi presents naive art.

A visit to the KUMU art museum in Tallinn’s Kadriorg district is a must for art lovers and those interested in Estonian culture. The futuristic building opened in 2006, and in 2008 the museum was voted the best European museum of the year. Classic as well as contemporary exhibits are shown.

Festivals, concerts, exhibitions – cultural events play a major role in the Baltic state. It is worth browsing through the calendar of events and maybe even adapting your vacation to it in order to be able to attend one or the other highlight.

Literature fans can visit the two largest cities in Estonia. The “HeadRead” literary festival takes place in Tallinn every May and the “Prima Vista Festival” in Tartu in the same month. In addition, the Estonian Writers’ Union holds weekly readings in both cities. Jazz fans can listen to the Estonian jazz elite at the annual Jazzkaar festival. Classical music is performed at the “Brigitta Festival” in St. Brigitta Monastery in the Pirita suburb of Tallinn. For more information on cultural events in Estonia, please contact the Estonian Tourist Office.

Shopping and Eating in Portugal