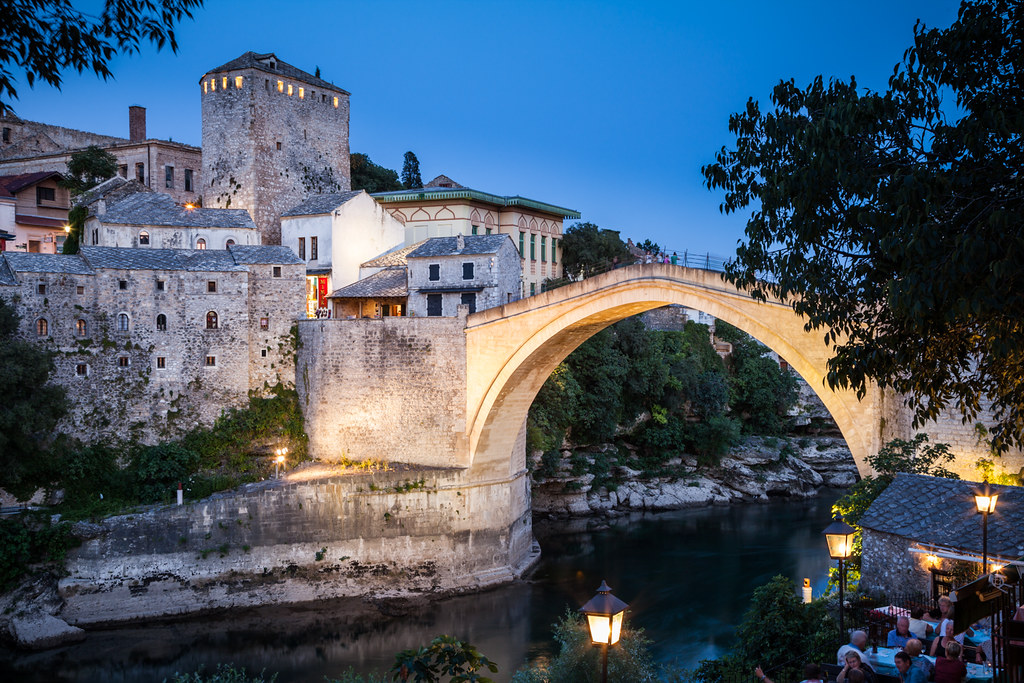 As a country that starts with B listed on Countryaah.com, the country of Bosnia and Herzegovina impresses with a unique flora; numerous orchid and lily species, which are considered extinct in the rest of Europe, are native here. One of the last primeval forests in Europe lies in the 175 km² Sutjeska National Park. Brown bears, wolves and golden eagles find ideal living conditions in this untouched, rugged wilderness. 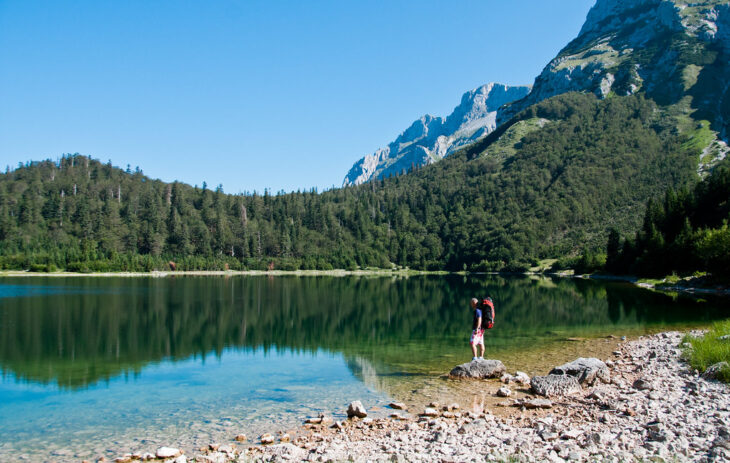 Today we are hiking in the mountains of Bjelasnica, where many disciplines of the 1984 Winter Olympics were held. From the traditional Bosnian mosque in the highland village of Umoljani, where we stay for three days in a small guesthouse, we walk along a stream past seven water mills. We circle the ridge and come to the waterfalls of Studeni Potok. We literally reach the highlight of the day with Lukomir, Bosnia’s highest village (1469 m) with its “Stecci”, tombs from the 14th and 15th centuries. At the edge of the village you have a fabulous view of the Rakitnica Gorge, one of the deepest canyons in the Dinaric Mountains.

This seven-day trek is for people in good physical condition. Sometimes you have to hold out longer, 360-degree panoramas and a seemingly endless sky are waiting for you. In addition, we get to know Sarajevo, which has been shaken by history, as well as Mostar and Blagaj with its karst spring Vrelo Bune and the famous dervish monastery.

From the Sutjeska National Park we set off towards Maglic, the highest mountain in Bosnia and Herzegovina. First it goes through forests and mountainous terrain, then the path leads uphill along steep cliffs for about four hours. Slowly the surrounding mountains remain below us. Finally at the summit it’s time for a picnic, we look down on Montenegro and the very clean, emerald green Trnovacko Lake.

After our arrival (arrival time does not matter, but preferably until 2 p.m.) we are driven to the hotel. or expected right there. In the afternoon we explore Sarajevo, a place where Eastern and Western influences have created a fascinating city. Sarajevo has a strong oriental character and is also one of the most culturally diverse cities in Europe. Sarajevo was under Turkish rule for over 400 years until it was replaced by the Austro-Hungarian monarchy in the late 19th century. Forty years later, the empire fell when Archduke Franz Ferdinand was shot in Sarajevo. This event sparked the First World War. In the late 20th century, Sarajevo hosted the 1984 Winter Olympics and was besieged in the Bosnian War just a few years later. Our tour to the historical and cultural places as well as to the theaters of war of this city will enable you to piece together the pieces of the puzzle of the complex and fascinating history of this city. In the evening we discuss all the details of the trip at the welcome dinner.

Today we hike to the summit of Bjelasnica, at 2,067 m the highest peak in the region. We start our hike on a winding mountain road from Grkarica, where we enter a dense coniferous forest. This path leads us over the Igman. The area has an interesting microclimate, which is caused by the special relief of the area, such as the karst funnels and the special vegetation. We are slowly gaining altitude, the Vlahinja ridge always in sight. We get to a refuge below the ridge. From here a stony path leads us to the summit. There we find an old Austrian-Hungarian weather station and have a magnificent view of the highest mountains in the Bjelasnica, Prenj, Cvrsnica, Vranica, Visocica and Treskavica region and also of Sarajevo. From the summit we descend over green grass paths to the highland village of Umoljani. There we will be served a delicious homemade dinner. The small village will be our base for the next three days.

Today we are hiking in the mountains of Bjelasnica, where many disciplines of the 1984 Winter Olympics were held. From the traditional Bosnian mosque of Umoljani, we will walk along the seven watermills and the natural water spring that has been used to grind flour for centuries. We circle the ridge until the peak of Rakitnica appears in front of us. Continue to the Studeni Potok waterfalls. At certain times of the year the water falls over 400 m deep into the Rakitnica Gorge. Walking upstream we come across the fields of Studeni and the winding Studeni River. We hike on to Lukomir, Bosnia’s highest mountain village at 1,469 m with its ancient “Stecci” (medieval tombs). Here the villagers still live a very original life. At the edge of the village you have a fabulous view of the Rakitnica gorge, Obalj and Visocica. After a simple but delicious homemade lunch, we hike back to our starting point, Umoljani.

Today’s hike with numerous beautiful views makes the heart beat faster and requires good physical condition. First we go briefly down to the Rakitnica Gorge. Hidden in the mountain slopes, we arrive in the village of Tusila, which is at 1,200 m. We hike across meadows and through thick beech forests. We master the last part of the ascent on a steep path to the summit of Vito (1,960 m). An endless sky, a 360 degree view and a picnic on the summit are the rewards for our efforts. The descent is on a path along the summit ridge after reaching the top of Drstva (1,808 m). A steep mountain path ends 1,200 m below in the Rakitnica Gorge, one of the most pristine gorges in the entire Balkans. Back from Tusila we come back to our starting point.

In the morning we will be driven to our hotel in Sutjeska National Park. Once there, you continue to the quiet and picturesque lake of Donje Bare. After lunch we ascend through beech forests and open, mountainous terrain to the summit of Ugljesin (1,858 m). From here you have a magnificent view of the Zelengora peaks and the massive rock face of Volujak. We continue the circular route to Gornje Bare Lake on the Tovarnica ridge for about 1.5 hours. As a companion, we can always see Bosnia’s highest peak on the horizon. For dinner we will be brought back to the hotel in the Tjentiste valley. And there, too, we are surrounded by the highest mountains in Bosnia and Herzegovina.

To the highest peak in Bosnia and Herzegovina, Maglic (2,386 m)

We drive about 1 hour to Lokva Derneciste, from where we make our way to Maglic through forests and mountainous terrain. We hike uphill for about 4 challenging hours on well-laid out hiking trails along steep cliffs. With every step we gain height and leave the other peaks behind us. Then finally we reach the summit, have lunch and enjoy the view of Montenegro and Lake Trnovacko with its emerald green water. After descending to the lake, we continue to hike to Prijevor, from where we are brought back to the hotel in Tjentiste.

Today we take it easy and discover the cultural heritage of the Herzegovina region. We leave the Sutjeska National Park and travel to Blagaj and Mostar, where we will also spend the night. The main attractions of Blagaj are the Buna spring and the adjacent Ottoman dervish monastery. The source is unique. It rises from a 200m high rock face and feeds the river Buna on its own. No wonder that this scene has already impressed the Ottoman sultans. They had a shrine built right next to the spring. The 16th century monastery was built for the dervish cult and is still one of the most mystical places in Bosnia Herzegovina. Blagaj’s old town is also worth a tour. In this sleepy Herzegovinian city the clocks are still ticking very slowly and many of the old buildings are reminiscent of the Ottoman period. On the newly created culture trail, you can comfortably explore the city in just under an hour. The route starts at the Tekija Dervish Monastery, which was built in the 17th century and is a wonderful example of Ottoman stone masonry. In the neighborhood there are old flour mills that once drove the raging Buna. Furthermore, today we have the opportunity to visit one of the numerous wineries in Herzegovina and try the local red and white wines. The wines of Herzegovina are among the newcomers of the “second world” wines, although the tradition already existed in Roman times. The Mediterranean climate of Herzegovina and the fertile soils allow the finest wines of southern Europe to grow. We end the day with sightseeing in Mostar, which was founded in the 15th century and enchants with its beauty. The architecture encountered here is a wonderful mixture of Turkish ingenuity and Dalmatian craftsmanship. We spend the afternoon exploring Mostar. You must have heard a lot about Mostar, which was divided during the war in the early 90s. The scars of the conflict can still be seen, but these days Mostar is once again a vibrant and peaceful city with a fascinating history.

From Mostar we drive briefly to Diva Grabovica, a winding valley in the exceptionally beautiful surroundings of the Cvrsnica mountain (2,228 m), exactly where the Mediterranean meets the harsh alpine climate. A great hike that leads through the old forests of the Cvrsnica uphill to Zjleb. Always following King Karadjordjevic’s old hunting trail. The king had a hunting lodge built near the summit because he was fascinated by the rich flora and fauna of the region. He’s long dead, but his path still exists and we’ve been using it for years. The hike that starts in the Diva Grabovica valley leads us through a dense beech forest. There are quite steep climbs in some sections, but they are always rewarding and spectacular. We pass several springs, so the water supply is “Nema Problema”. Bring a water bottle to be prepared for the further journey. It goes steeply uphill for 2.5 hours before we reach our destination. During our lunch we enjoy the view of the largest rock face on the Balkan Peninsula, over 1,000 m high. We can marvel at the peaks of the Cvrsnica chain all around us. Mali and Veliki Medved rise in front of us, steep rock faces on the right and the stony peaks of Cvrsnica in our back. At the end of the day we will be brought back to the capital Sarajevo.

In the morning we still have some free time. Then we will be taken to the airport / bus station. 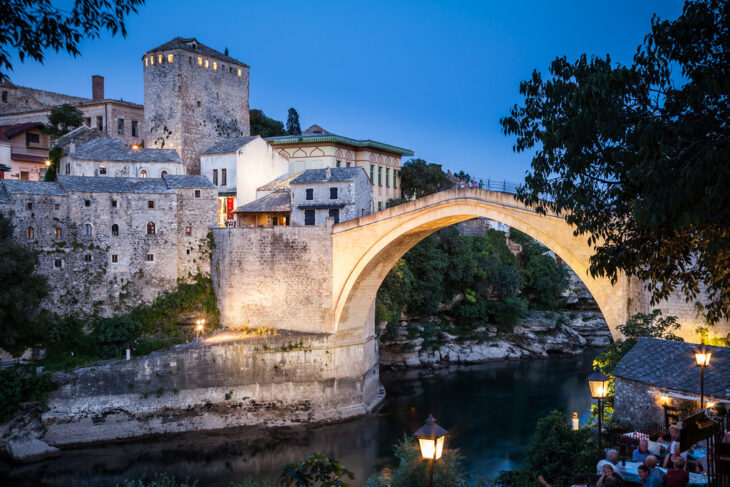